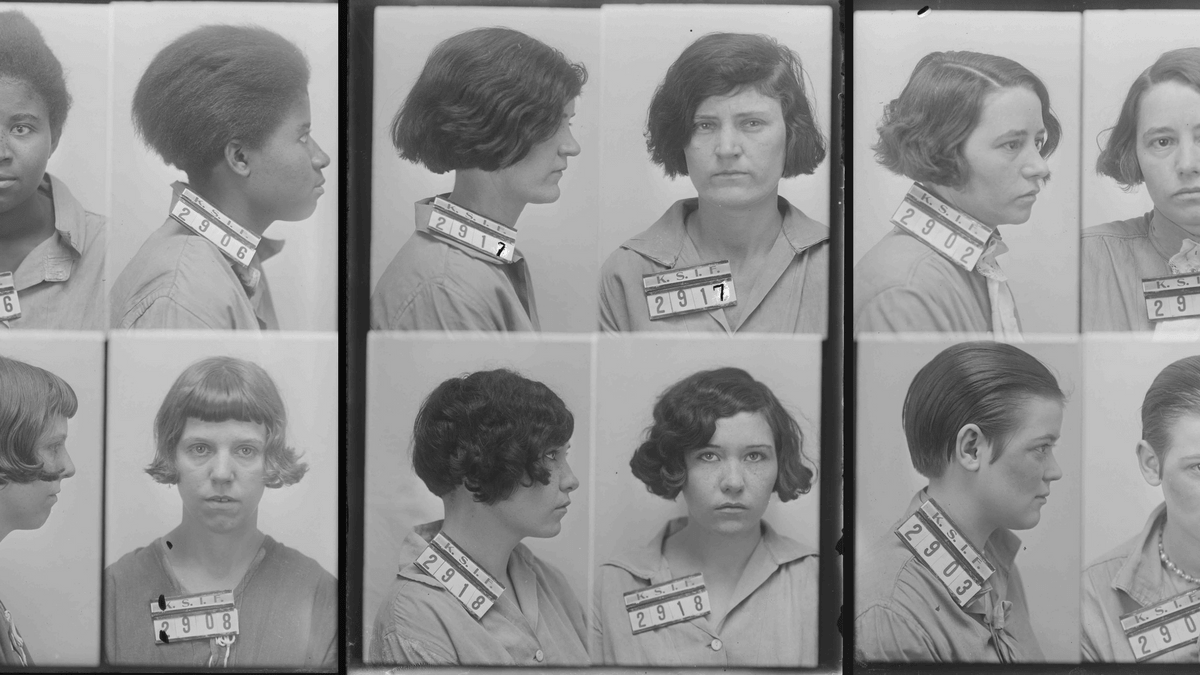 Kansas imprisoned more than 5,000 women and girls for having STDs

In May 1926, Arthur Pierson stormed into the Better Eats Cafe in downtown Kansas City, Kansas, where his wife, Alice Wilcox, was working the night shift. He was likely drunk and spoiling for a fight.

Take it outside, Alice’s boss said.

The Piersons had been unhappily married before splitting up in 1925. They had gotten back together earlier that month, though god knows why. Alice complained that her “husband drinks every day” and “never works.”

Out on Kansas Avenue, their arguing turned violent. Someone called the cops, but before help arrived Arthur had punched and slapped Alice in the face.

The police charged him with assault and put him in jail. But they refused to release Alice. Even though she clearly had been the victim, and was legally married to Arthur, the cops put her through an ordeal that thousands of other marginalized women in 1920s Kansas endured.

They had Alice Pierson checked for venereal disease.

A police examiner quickly determined that she had gonorrhea, though whether she was actually tested for it is not clear.

Following this pronouncement, Alice was ordered to the Kansas State Industrial Farm, an all-female prison camp in Lansing, about an hour away. This mug shot was taken at the farm. You can still see one of her black eyes.

There was no due process because Alice Wilcox Pierson had not been charged with a crime. She had been detained, and then “interned,” under a provision of Kansas state law known as Chapter 205, which permitted “the isolation and quarantine” of persons “to prevent the spread and dissemination of disease dangerous to the public health.”

Passed during World War I to protect soldiers from syphilis, Chapter 205 stayed on the books for another 25 years, serving as a handy tool for local police against “persons who were irresponsible and could not be trusted to safeguard others from infection,” as one government report put it.

Over a 25-year period, the state of Kansas interned more than 5,300 persons for violations of Chapter 205 — nearly all of them females.

“The law itself was very, very broad,” says Nicole Perry of the University of Kansas, who wrote her doctoral thesis on the statute. “The focus on venereal disease and on women came through choices made about how to implement it.”

Indeed, she adds, “Chapter 205 became the dominant legal mechanism to detain women in Kansas” and “was selectively used to control the sexual behaviors of women who did not fulfill the requirements of respectability.”

“I lived just as near right as I know how to live,” said Viola Jones, inmate 2904 at Lansing.

Upon arrival, a prison official would do an intake interview with every “interne.” (The language of internment, rather than imprisonment, was used for Chapter 205 women, much as it would be for Americans of Japanese descent in World War II.)

The interviewer was to probe into the woman’s moral character. Did the woman drink? Smoke? Did insanity run in the family? And: “At what age did you commit your first offense against the law of chastity?” And: “Cause of downfall?”

Viola Jones’ story, told on a single typewritten sheet, is both heartbreaking and infuriating to read.

She had grown up in a two-parent home with seven siblings in the central Kansas city of Hutchinson. She said she used to teach Sunday school at the church the family attended. After ninth grade Viola dropped out of school. At 18 or 19, she had a baby. The baby died. She took up with another man, Charles Williams, in 1925. They married. After three months, she said, “I left him.”

This was her first brush with the law, and Viola Jones told her interviewer flatly, “I do not know how I came to be arrested.”

Moralizing a public health problem is the American way

Prison reform was one of the first causes taken up by the state’s progressive women after winning the vote in 1912, making Kansas just the eighth state to have universal suffrage. Unlike more militant feminists who chained themselves to the White House gates, these ladies won the franchise by gentle persuasion. They vowed to use their political power to eliminate vice and unwholesomeness in the Sunflower State.

In 1916, they succeeded in having part of the state penitentiary in Lansing converted into a working farm, where women prisoners could work off their sentences by growing their own food. The following year, the United States entered the war in Europe.

Military leaders had been worried about the impact an epidemic of syphilis or gonorrhea might have on combat readiness. (At the time, no one imagined a flu pandemic would account for half of U.S. troop deaths in the war.)

Various approaches were discussed inside the military — including a plan to distribute condoms and legalize prostitution near U.S. bases.

In the end, though, the all-American urge to moralize a public health problem proved too strong. The troops were given abstinence training. And women suspected of spreading venereal diseases were locked up. More than 18,000 women were isolated in federally funded facilities during World War I.

It was to aid this federal effort that the Kansas legislature passed Chapter 205. Yet while other quarantine centers were disbanded after the war, Kansas kept sending women to prison using Chapter 205. Both law enforcement and the progressive women saw its usefulness.

The prison farm’s matron would sometimes conduct the interviews. Being a good progressive, she made sure to create in her reports a narrative of sin (before internment), rehabilitation and disease cure (internment), and plans to live uprightly (after internment) for each of the women and girls she interviewed.

But who were these unlucky internes?

Sometimes, says Perry, they were girls or women who had picked the wrong man. In this narrative, being caught with a felon, or a bunch of party boys, or a mean no-good drunk like Arthur Pierson said something about her. She was likely morally lax and could benefit from the education that Lansing (it was said) delivered.

Other females were reported by vindictive exes, or referred by family members. (Had Viola Jones been too much for her parents to handle? All we know is that she was not planning to face them again. “Will go to Topeka and work when released,” she told her interviewer.)

Some were just in the wrong place at the wrong time.

After the war, the Board of Health ended its role in the Chapter 205 process, leaving police to do all the testing. Syphilis and gonorrhea tests routinely returned false positives, as much as 25 percent of the time in gonorrhea tests.

So authorities also relied on “social hygiene” — an even more spurious method that used the woman’s reputation to judge the likelihood that she had an STD. Thus, notes Perry, even if her test came back negative, “and her lifestyle was not fitting with middle-class notions of respectability, she also might be diagnosed with venereal disease.”

As a result, Lansing stayed full. On average, says Perry, 71 percent of the prison farm’s population consisted of Chapter 205 internes. They worked, ate, and lived side by side with females convicted of actual crimes, including assault and murder.

Though their sentences were officially “indefinite,” they would usually stay four to six months, receiving moral instruction and treatment for their disease. (For poorer, older women, this was a lifesaver. Social workers would refer some clients to Lansing under Chapter 205 just to get them much-needed health care.)

Chapter 205 finally fell out of use in the early 1940s. By that time the U.S. was in another great war, and the Army had found something much more effective in the fight against STDs — penicillin.

“While undoubtedly rendering valuable aid to the police at certain times,” an independent commission would conclude, using Chapter 205 to police thousands of Kansas women deemed sexually immoral “was scarcely the intent of the law.”

The Lansing Historical Society operates a tiny museum on the grounds of the prison, which has been converted to a men’s facility. Curator Jennifer Myer selected the photos seen here, and with support from the Kansas Humanities Council, had the glass negatives digitized.

For this story I was able to match these women’s photos with their words.

Mary Winborn, age 19, originally from Lawrence, inmate 2905, arrived at Lansing June 12, 1926. Mary had been in the criminal justice system since skipping out of school in 1923. She was placed in a work home. “I ran away from the place where I was placed,” she said. “I did not like the place I was working at.” She left with another young woman at the home, who was also sent to Lansing on Chapter 205 grounds.

Lucille Crouse, Wichita, age 18, inmate 2910, arrived at Lansing June 14, 1926. This was her first arrest. “I was living with C.W. Cramer of Wichita and passing as his wife. Mr. Jave (a lover) turned me in because I would have nothing to do with him. Cramer is the only man I’ve been intimate with. I would not marry him as he did not know how to make a home. I was abused by my step-parents. Married once. He got divorce. One child, dead.”

Eva Wolf Page, Topeka, Kansas, age 16, inmate 2900, arrived at Lansing June 3, 1926. First arrest. Left home at 14. “Roberta Triemer and I went on a fishing trip. She was arrested and got fined. I had taken 6 treatments at Clinic, thought I was cured and did not go back any more. I was arrested and brought up.”

Many thanks to Nicole Perry for supplying intake interviews.