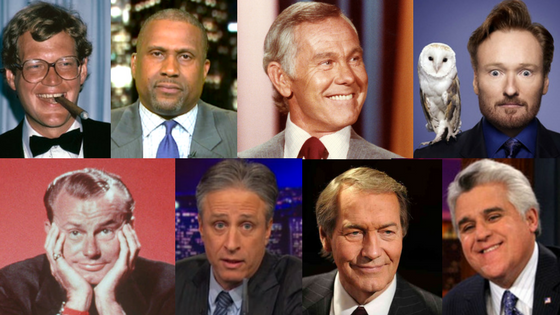 After PBS cut ties with Tavis Smiley, host of one of its late-night talk shows, the media treated the news as just one more name added to the list of stars accused of inappropriate sexual advances at work.

But this one was different.

Weeks earlier, PBS had dispatched Charlie Rose, the host of its other late-night talk show, citing even creepier allegations.

Now public TV had an entire block of its schedule un-hosted, 90 minutes every weeknight.

That’s because these deceptively simple programs — some of them straight interview shows, some of them blends of comedy and talk — have had an outsized influence on our culture for decades.

But the late night talk show has, from the beginning to the present day, been a bastion of male power.

Throughout the broadcast day, women turn on the TV and see women starring in shows, from prime time to morning news to daytime (a segment created for women).

Yet late-night talk shows remain firmly in the grip of the patriarchy.

To be sure, women have gotten writing and hosting gigs at late-night shows. But not since 2001 has a woman headlined one of the nightly network shows that are bedtime rituals for millions of Americans.

And that means something at a time when many are seeking to change the conversation about women in our culture.

What better way than to have women leading the conversation?

NBC’s Pat Weaver, father of Sigourney, invented the late night talk show in 1954. Cheap to produce, it quickly became an ATM for the network. At one point “The Tonight Show Starring Johnny Carson” accounted for 17 percent of NBC’s profit. Eventually the TV audience fragmented enough to let ABC, CBS, PBS, and cable channels into the game.

Hosting a late night talk show is a virtual sinecure. Charlie Rose did it for 33 years, dating back to his time on CBS Nightwatch. David Letterman also got to 33 years. Carson, 30 years. Conan O’Brien has hosted three shows on two networks, for 23 years and counting. Jay Leno, 21 years.

Before PBS let him go, Tavis Smiley had 18 years of late-night experience, counting five seasons on BET. Jon Stewart, including a short-lived talk show in the ’90s, hosted 17 years.

How about the women? Well, here’s one way to look at it…

I added up the combined tenures of every female host in the history of late-night talk shows and got a total of 14 years.

“The guy behind the desk”

OK, so late-night talk shows are the last bastion of the patriarchy. Does it matter?

Yes, because as Johnny Carson once said, it’s all about “the guy behind the desk.”

And as someone who has written a lot about these shows, I know that the cultural impact of late-night TV goes well beyond the desk.

The audience is highly desirable — younger, better educated, more likely to vote. Many of them don’t watch traditional news. Advertisers want to reach them. So do politicians.

The late-night talk show host, with his informal manner and aversion to tough questions, offers the politician a very different interview experience than the press.

Often such encounters make history. Here are the two most powerful examples I can think of.

If I had to name one host who changed how we look at late-night TV, it would be Jack Paar.

Taking over the faltering “Tonight” after Steve Allen left for greener pastures, Paar saved the late night talk show by reinventing it.

He was a friend of the Kennedy family and had then-senator JFK on the show when he was running for president. On the eve of the 1960 election, Paar invited Sen. Robert Kennedy and his wife Ethel Kennedy onto his guest couch.

Bobby was more than the younger brother of the Democratic candidate — he was his campaign manager. And the polls were opening in just a few hours.

Television was, in theory, governed by a Fairness Doctrine back then. But it obviously had no effect that night, as Paar asked his guest to tell an audience of millions, “in three minutes,” why John F. Kennedy should be president. (I’d love to show you the video, but it’s locked away in the collection of the Paley Center for Media.)

Bobby proceeded to deliver an infomercial that was twice that long. It was arguably as impactful as the Kennedy-Nixon debates that we remember today.

The family patriarch, Joe Kennedy, later wrote the host a note of thanks. “If we had had five more Jack Paars in the United States,” he declared, “we wouldn’t have had to wait almost 24 hours before we knew we were elected.”

After moving his show to California in 1972, Johnny Carson had steered clear of politicians as guests. America’s national comedian rightly feared that any taint of political bias would cost him viewers.

A few days prior, while delivering the keynote address at the 1988 Democratic National Convention, Clinton had gone on and on and on … until the crowd started to boo. This  televised disaster — his first time on a national stage — had all but wrecked his dream of getting to the White House.

A friend of the Clintons, TV producer Linda Bloodworth-Thomason, suggested they pitch Bill to “The Tonight Show.” But Carson producer Freddy De Cordova said no.

Only after Clinton offered to play his saxophone on the show did Johnny said yes.

And a few days later, he played the governor like a drum.

Below is a video of Clinton at the convention and then, eight days later, getting redeemed by Carson. It isn’t the best quality, but I’m lucky to have it at all (thank you Don Giller). Here’s a link to just the audio.

David Letterman and the abuses of male power

These and many similar late-night moments almost always involved powerful men interviewing other powerful men. Was the intent to reinforce male power? Of course not.

For the first time, though, we’re acknowledging that sexual harassment and abuse of women in the workforce has been much more prevalent than we thought.

So when a powerful man enjoys outsized cultural influence, and uses that platform to reinforce views of women that might — just might — play into a culture of harassment and abuse, we should call that out.

And I’d start with David Letterman.

He was the most influential late night host of his generation. And I think it’s fair to say he and his writing staff changed American comedy in the 1980s.

He certainly changed my life. No Letterman, no Late Show News, no career in journalism.

Early on, though, I realized I would have to hold my appreciation of Dave’s talent in one hand, and the cultural messages his show was sending in the other.

This went beyond the usual parade of starlets in skimpy dresses or even the time Drew Barrymore flashed him. Or the fact that his writing staff was all-male for years after Dave’s girlfriend and his first head writer, Merrill Markoe, left the show.

@nandelabra @tcarmody Letterman liked funny women. But a lot of his show was created by his ex, Merrill Markoe, who rarely gets credit.

On the show powerful and assertive women often got under Dave’s skin. But since his weird reactions could be played for laughs, no one thought anything of it.

Oprah Winfrey was so badly treated during one taping that she stayed away from Letterman for almost 20 years. Cher, Sandra Bernhard, Marilyn Vos Savant, those endless Janet Reno jokes … and the list goes on.

For me, Dave’s on-air treatment of a woman known as the Peach Lady was a turning point.

While scanning the crowd at the 1995 U.S. Open tennis tournament, “Late Show” cameras caught an older, female spectator unattractively munching on a peach. For days, Letterman insisted on playing the clip. He started wondering who the Peach Lady was. No one knew.

So the bit escalated until, on one show, Dave broadcast the clip on the Times Square jumbo screen, along with an 800 number viewers could call.

At this point (and this was a scoop I reported), her attorney sued the show.

Not coincidentally, it was during this time that “Late Show” fell from No. 1 to No. 2 in the ratings behind Jay Leno. Say what you will about Leno, he never had these issues with women (and is married to a Feminist Majority board member).

As for Dave, the rest was sexually inappropriate history….

Nightly is better than weekly

Since 1954, there have been just two women whose name appeared in the title of a late-night network franchise. “The Late Show with Joan Rivers” was the very first program on the Fox network in 1986. And in 2000, NBC named Cynthia Garrett as permanent host of its “Later” franchise.

Neither woman made it to her first anniversary.

Today, women are more visible in late night than ever. Chelsea Handler hosted a successful nightly talk show on the E! cable channel, then was signed by Netflix to make more interviews.

And there are the weekly shows…

I chatted with @robinthede for @etnow about why late night needs to hear the black woman’s perspective! —> https://t.co/rflojNHvhi

“Their bravery changed the world,” Samantha Bee said of the women who came forward against Roy Moore. Late-night roundup: https://t.co/vX5Yaj0wdI

But simple math bears out the power of the men in late night’s most coveted jobs.

So how do you land one of these gigs, typically? It helps to have had a similar job. Cable is the network farm system. Yet historically, women have been left out there as well, though that is starting to change.

You may have noticed, also, that on my list of the longest-tenured stars in late night, each of those men, with the exception of Johnny Carson, had been host of at least two late-night talk shows. (I created an infographic for that. If you use it, be sure you link back here.)Handler’s deal with Netflix bodes well for the prospects of women also getting second chances when their first show goes away. However, this cuts both ways. Handler announced she was ending that show, and Netflix recently signed a deal with David Letterman.

I can’t remember if that was before or after Kevin Spacey was dropped from House of Cards.

You would think that PBS president Paula Kerger would be ready to turn the page here.

Under her leadership PBS made history when the “NewsHour” became the first nightly network telecast anchored by two women. Following the death of co-anchor Gwen Ifill, various men were tried out in her chair before someone sensibly decided that Judy Woodruff could run the show by herself.

For now, PBS is filling the Charlie Rose time slot with half hours from BBC World News America anchor Katty Kay and Christiane Amanpour, who is already on CNN and ABC.

They’re fine, but they already have plenty of work and are “interim” hosts.

I don’t cover media anymore, so I can’t think of anyone else to nominate for either Rose’s or Smiley’s jobs.

But I’ll bet Paula Kerger can.

And history delivers a pretty convincing case that it’s time.