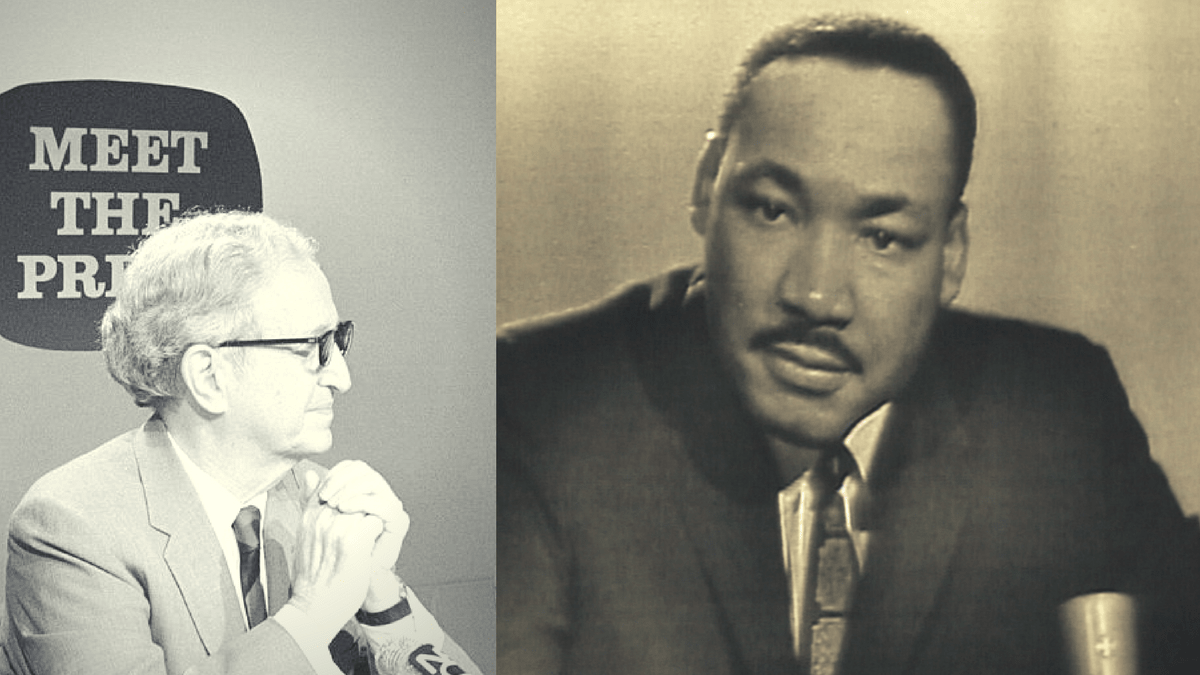 During the April 1, 2018, episode of “Meet the Press,” moderator Chuck Todd took a moment to recognize Dr. Martin Luther King Jr. on the fiftieth anniversary of his death.

“Dr. King was on ‘Meet the Press’ five times, and in an appearance in 1965, Dr. King explained his advocacy of non-violent disobedience,” he said.

But wait! It gets worse.

During those few appearances on “Meet the Press,” Dr. King was subjected to  hostile and demeaning interrogations that had little to do with the struggle against Jim Crow.

Dr. King spent nearly all his time on TV’s most prestigious interview show playing defense, rather than having the honest conversation about race that white America needed (and still needs).

His first appearance was April 17, 1960, more than three years after he had risen to prominence as leader of the Montgomery bus boycott. Here were typical questions that came his way:

“Harry Truman recently said this, and I quote, ‘If anyone came to my store and sat down, I would throw him out. Private business has its own rights and can do what it wants.’ Now, former President Truman is an old friend of the Negro, I believe. Isn’t this an indication that the sit-in strikes are doing the race, the Negro race, more harm than good?”

And this one from Gannett’s Washington correspondent: “Dr. King, this is a nation that lives under law. Above the Supreme Court is engraved, ‘Equal Justice Under Law.’ Are each of us to decide when it’s all right to break a law?”

Dr. King tried to explain that “sometimes it is necessary to dramatize an issue because many people are not aware of what is happening.” Indeed, no one on this clueless panel seemed aware that black people had been systematically denied access to public facilities and the ballot for decades because of laws passed throughout the Jim Crow South.

In August 1963 he appeared alongside the NAACP’s Roy Wilkins to preview the upcoming March on Washington.

With the dignified exception of NBC’s Robert MacNeil, the panel obsessed over what they saw as a coming Negro apocalypse.

“Mr. Wilkins,” one question went, “there are a great many people, as I am sure you know, who believe it would be impossible to bring more than 100,000 militant Negroes into Washington without incidents and possibly rioting.” Whoever those “great many people” were, they were mistaken.

‘Have communists infiltrated the movement?’

In 1964 Dr. King received the Nobel Peace Prize. He now stood on the world stage. Yet it would be nearly two and a half years before he appeared again on “Meet the Press.”

It came after the “Bloody Sunday” attack on Dr. King and other peaceful marchers in Selma, Alabama, on March 7, 1965. The images had shocked the country, and suddenly “Meet the Press” was desperate to have the Nobel laureate on the show. He was scheduled to preach in San Francisco that weekend, but NBC arranged for him to be interviewed by satellite.

Incredibly, “MTP” put a noted defender of segregation on the panel, Richmond Times-Dispatch columnist James J. Kilpatrick, who had debated Dr. King in 1960 over the legitimacy of the movement.

While Kilpatrick played to the states-rights crowd, another panelist bore in on a subject popular with white conservatives.

“Dr. King,” he asked, “have communists infiltrated the movement?”

“The philosophical undergirdings of our movement would make communism impossible,” Dr. King calmly replied, since the civil rights movement, unlike communism, was “based on a philosophy of nonviolence.”

But the times, they were a-changin’. Dr. King’s final appearance on “MTP” would be notable for its substance and lack of hostility.

The host started with an open-ended question about Dr. King and the Vietnam War.

“You said that if the war in Vietnam is escalated it may be necessary to engage in civil disobedience,” he asked. “What did you mean by that?”

Dr. King, who had been struggling to call attention to his anti-war stance, clearly welcomed the question.

“I meant that if the war continued and if it was escalated, if it continued to pervade the life of our nation in terms of poisoning much of its soul, it would be necessary for thousands of people who found that war abominable to engage in acts that would arouse the conscience of the nation,” Dr. King replied. “This war is destroying so much of what we hold dear.”

Also on the panel was Simeon Booker, longtime reporter for Jet magazine. It was a striking contrast from just two years earlier, when Spivak had put a states-rights Southerner on the panel.

Booker asked Dr. King the program’s most powerful question, and got the most remarkable answer.

“Dr. King,” he asked, “do you believe that the American racial problem can be solved?”

“I refuse to despair in this moment. I refuse to allow myself to fall into the dark chambers of pessimism, because I think in any social revolution the one thing that keeps it going is hope, and when hope dies somehow the revolution degenerates into a kind of nihilistic philosophy which says you must engage in disruption for disruption’s sake. … I believe that the forces of goodwill, white and black, in this country can work together to bring about a resolution of this problem. We have the resources to do it. At present we don’t have the will.” MLK on “Meet the Press,” 8/13/1967

By far this was the most cordial and substantive of any of Dr. King’s encounters on “Meet the Press.” And it would be his last.

A more in-depth version of my story, with even more head-slapping quotes, and my reflections on what we can draw today from Dr. King’s treatment on TV, appears on Timeline, the popular history site hosted by Medium.com. I’m a featured contributor to Timeline.

Whenever we think about MLK, we should remember the words of his sister, that he was “an ordinary and average man.”